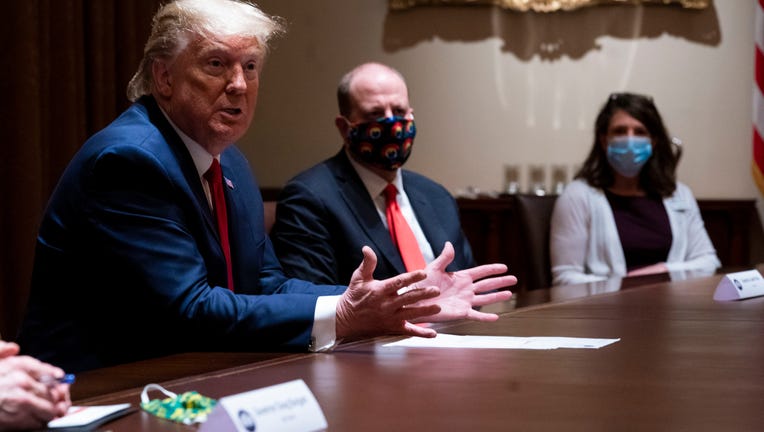 WASHINGTON, DC - MAY 13: Colorado Governor Jared Polis (C) wears a face mask as U.S. President Donald Trump makes remarks during a meeting in the Cabinet Room of the White House, May 13, 2020 in Washington, DC. (Photo by Doug Mills-Pool/Getty Images)

WASHINGTON - Health and Human Services Secretary Alex Azar says President Donald Trump's "unique" circumstances are why he doesn't wear a mask even as the government is urging people to do so.

Addressing spikes in reported coronavirus cases in some states, Azar said people "have to take ownership" of their own behaviors by social distancing and wearing masks if possible.

He says Trump doesn't have to follow his own administration's guidance because as a leader of the free world he's tested regularly and is in "very different circumstances than the rest of us."

Azar declined to say whether he's ever asked Trump to wear a mask. He told CNN and NBC that his own message to the people is to take precautions for "public health."

Democratic Gov. Jay Inslee says Trump should spend more time tweeting about wearing masks instead of monuments. Inslee tells CBS: "We need a president who will care more about living Americans and less about dead Confederates."