Chicago Sky forward Jantel Lavender is recovering after surgery on a broken bone in her left foot. 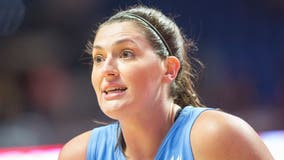 Dolson said in a video that aired Friday night during ESPN’s broadcast of the WNBA draft that she and her “whole family” tested positive about a month ago, the Chicago Tribune reported.

Dearica Hamby hit a shot from a few steps inside halfcourt with 5 seconds left to lift Las Vegas to a 93-92 win over the Chicago Sky on Sunday in the second round of the WNBA playoffs.

Diamond DeShields scored 25 points and the fifth-seeded Chicago Sky used a dominating second half for a 105-76 win over the eighth-seeded Phoenix Mercury in a first-round, winner-take-all playoff game on Wednesday night. 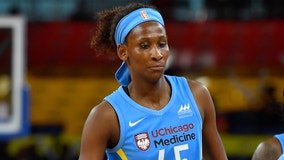 The WNBA has rescinded a technical foul against Chicago forward Astou Ndour, who was ejected for making contact with an official during the Sky's loss to Washington on Sunday.

Diamond DeShields scored a career-high 30 points and the Chicago Sky beat the Connecticut Sun 109-104 in overtime Friday night to hand the WNBA regular-season title to Washington.

Arike Ogunbowale scored eight of her 35 points in the fourth quarter and the Dallas Wings snapped a four-game losing skid with an 88-83 victory over the Chicago Sky on Thursday night. 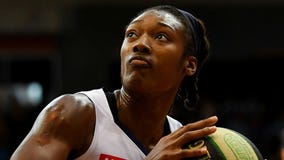 Kayla Alexander loved to draw since she was a child, when she was inspired by a patient teacher.

A'ja Wilson returned from a nine-game absence to score 25 points off the bench, Liz Cambage had 23 points and 10 rebounds and the Las Vegas Aces beat the Chicago Sky 100-85 on Sunday night.

Allie Quigley scored 26 points to help the Chicago Sky beat Los Angeles 91-81 to pull into a tie for fourth place with the Sparks on Friday night. 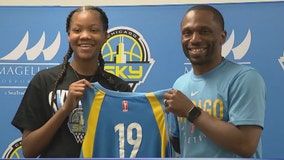 A little girl is chasing her big dreams.

Chelsea Gray scored seven of her 26 points in the final 1:25 and the Los Angeles Sparks overcame a 16-point deficit to beat the Chicago Sky 84-81 on Sunday.

Diamond DeShields had 12 points, a career-high 12 rebounds and a season-best six assists, Courtney Vandersloot added 13 points and nine rebounds, and the Chicago Sky beat the Atlanta Dream 87-75 on Saturday night.

Jonquel Jones had 27 points and 11 rebounds for her 10th double-double this season, and the Connecticut Sun held off the Chicago Sky 100-94 on Tuesday night for their fifth straight win.

A'ja Wilson, Liz Cambage and Kayla McBride all scored 16 points to lead a balanced offense as Las Vegas beat Chicago 90-82 on Tuesday in a matinee game.